5 Inspiring Models Breaking All the Rules

by Dionna Carter
in FASHION, STYLE Confession time: I am a previous binge watcher of America’s Next Top Model. One of my favorite episodes each season was when the models received their makeovers. I was always excited to see how the women would be transformed. There would be some “wow” moments but, without fail, there was usually at least one transformation that was disappointing. I would bemoan the loss of a model’s gorgeous locks or the makeup job that removed pieces of another’s unique look. These little disappointments made me wonder: how many other models have been hemmed and tailored to fit someone else’s perception of beauty? In an industry that can sometimes feel counterfeit, it’s refreshing to know there are still some courageous women willing to break the rules. Here are five such models who have found success on their own terms.

It’s no small feat to be world-famous. To be the world’s most famous model with Down Syndrome is a unique accomplishment that deserves special recognition. 20-year-old Madeline Stuart did not allow her disability to limit her – instead she chased after her dreams with great fervor, making great strides in modeling and even achieving her goal of opening a dance school. Her success has given her the latitude to communicate her ever-important message of inclusion. Her message? “If [you see someone with] a disability, remember they are just like you, they want to feel included and loved.”

Carmen Dell’Orefice has proven that age is truly nothing but a number. At the young age of 86, she continues to grace the catwalk with those less than half her age. Since her teenage years, Carmen has been a force to be reckoned with, making appearances in Vogue, W, and Harpers Bazaar. What’s so inspiring is that Carmen not only holds the title of oldest working model, but she has remained relevant, despite taking nearly 20 years off from her career. Her ability to pick back up where she left off and continue excelling well into her 80s demonstrates true determination and persistence.

Beauty should not be confined to conventional standards and Jillian Mercado can personally attest to this truth. Jillian, a woman living with muscular dystrophy, is an advocate for greater diversity within the fashion industry. Although she uses a wheelchair, she does not want to be defined as a “disabled model” but, simply, a model.  Jillian has done much to change the perception of those who are differently labeled and serves as a great source of inspiration.

The “Melanin Goddess” is a name that seems to exude self-confidence, assurance, and poise. However, this wasn’t always the case for Khoudia Diop, the model behind the moniker. Growing up, Khoudia endured negative remarks and was shunned because she was “too dark.” It wasn’t until she was approached by Tori Elizabeth and Victory Jones, founders of The Colored Girl, to appear in The Colored Girl: Rebirth campaign, that Khoudia began to fully embrace her beautiful skin. With a focus on self-love and acceptance, this campaign gave Khoudia the space to show others that beauty comes in all hues. Says Diop, “I’m seeing change in the industry and, more importantly, a lot of young women going after their dreams and not letting anyone tell them how they should look to be successful, and I think it’s amazing!”

@makeupbyjmonroy captured this BTS from my cover shoot yesterday & it’s totally unretouched & I’m sitting in a way that isn’t “flattering” but that’s why I love it. It’s real. My gorgeous, supportive husband (who has held my hand the entire time through this book) is laughing behind me & I’m just hanging out in shapewear takin a Wearing makeup doesn’t make me less of a feminist, & neither does wearing shapewear. It’s all about our choice to wear & do what we want with our bodies. I will keep resisting, with perfect coiffed hair from @hisvintagetouch too ✌#effyourbeautystandards #NotSoSubtleTess

If you’ve ever researched the size of a typical model you’ll see heights around 5’9” – 5’11 and sizes between 0-4…not a very wide range, right? Well, meet Tess Holliday, a model who is shunning these standards and creating her own. As the first size-22 model to be signed to a major modeling agency, Tess is all about being proud of the skin you’re in. She uses her platforms to adamantly speak out against those who attempt to shame her and others about their bodies. She is fervent that women should have the right to eat what they want and STILL consider themselves beautiful.

These women may not fit what others have defined a model to be, but they’ve chosen to boldly embrace the attributes that set them apart from others in their field. Their courage to push past stereotypes and serve as uplifting role models to the world is admirable and deserves an ovation. 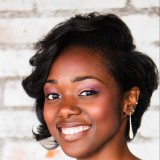 Dionna Carter is a graduate of Ohio University's E.W. Scripps School of Journalism and a current freelance writer in Columbus, OH. She has previously written for publications such as Columbus Parent and CbusChic.com. She enjoys laughing with her family and indulging in retail therapy.