8 US Destinations for the Ultimate Cat Lover Feline-fans, rejoice: your sweet, slightly sour, and sometimes spicy, ball of fur is really good for your health. Science shows that cats can cut down allergens, boost your self-esteem, elevate your mood, and even make it easier to socialize with other people. Cat owners also tend to be more intelligent and more particular than dog owners, says a 2016 study from Carroll University.

So, whether you’re a crazy cat lady or a dude that’s ready to publicly proclaim your “cat-mance” to the world, these eight locations will allow you to squeeze in a little more cat-cuddle time. 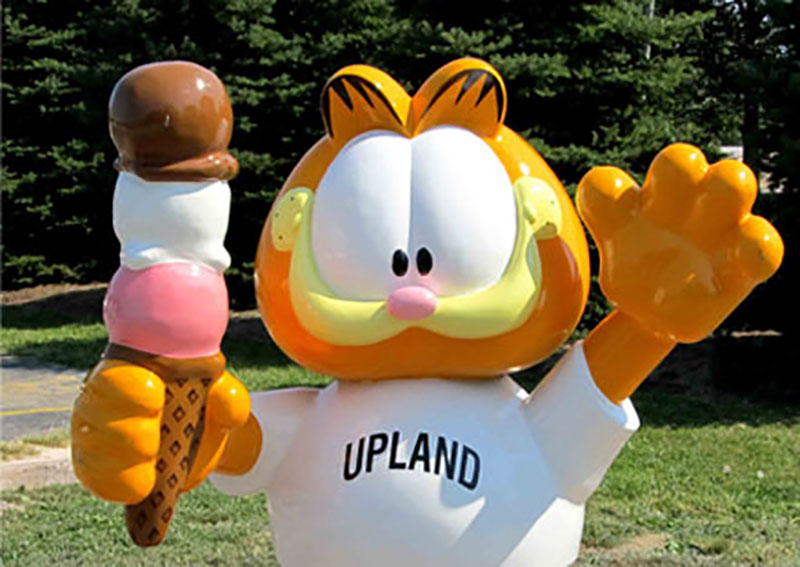 Everybody loves America’s favorite lasagna-scarfing, Monday-hating, spider-squashing fat cat, Garfield. The orange tabby makes the leap from paper to five-foot fiberglass in creator Jim Davis’ hometown of Fairmount, Indiana. Eleven statues depict the 35 year old feline in comical costumes or situations. Whether he’s reeling in grinning fish or squeezing himself into a Swayzee High School jersey, Garfield, the godfather of feline celebrities like Grumpy Cat, is the pre-internet king of cats—and he isn’t afraid to wear a cattywampus crown just to prove it. Adoptable cats Rowan and Lewis move in for a kiss on a miniature taco truck in The Cat Zone | Photo: Cathy Niland

Six years ago, Cat Town pawed open the doors of America’s first cat cafe, beating out San Francisco’s KitTea. Saving nearly 1,400 cats and reducing its euthanasia rate by 32%, Cat Town is the future of adoption—a cross between a coffee shop and an adoption center.  Because of health code regulations, it’s split into two sections. The Rawr Coffee Bar serves Highwire coffee, espresso drinks, cat-themed pastries, catnip-infused toys, and dehydrated raw treats.  The Cat Zone features eight to 24 adoptable felines. (Adoption fees are $50 for one cat or $75 for two cats.) The cats are free to play on miniatures of Oakland’s landmarks, slink by bright, cat-centric murals, or curl up on the human clientele. “The Cat Expo is the largest [and one of the oldest] of its kind in the country. We usually get 4,000 to 5,000 during its two days,” writes Linda Bohm, The Garden State Cat Club’s Marketing Director.  Here, you can watch therapy cats Waffle and Tirzah zoom around in their personalized, purple cars; take seminars on everything from pet CPR to grooming; or get your cat’s portrait done by New Jersey-native Steve Nyman. The highlight of the Expo? Two-hundred and fifty cats, representatives from nearly all 41 breeds, compete in 12-obstacle agility contests and breed showcases. All ticket proceeds go the Winn Feline Foundation, a nonprofit that funds cat health research. Ernest Hemingway may be famous for penning For Whom the Bell Tolls and A Farewell to Arms, but in Key West, Florida, he’s famous for another reason—six-toed, “gypsy” cats. In the 1930s, sea captain Stanley Dexter gifted the novelist a white, six-toed kitten named Snow White. (Seafaring legends claim that six-toed cats bring their owners a bounty of good luck.) As Hemingway once wrote, “One cat lead to another.” The proof? His grand, plantation-style home is teeming with 45 six-toed cats, all named after famous figures. Hemingway’s clowder spends their days sunbathing in the garden, lounging on century-old furniture, and receiving weekly veterinarian visits.  These historical treasures even have their own cemetery.  It’s just a hop, a skip, and a jump from the garden where Frank Sinatra and Marilyn Monroe are buried. Whether your cat is a purebred or a moggie, it’s invited to the Annual Average Joe Cat Show (currently in its 14th year, held on May 6, 2017) at Shoreline’s Spartan Recreation Center in Arlington, Washington. The show shells out over-the-top titles like “The Most Impressive Ear Hair”, “The Prettiest Eyes”, and “The Loudest Purr.” At the very least, it’s a chance to make friends with local Kitten Cam fans and cat fanciers from places like Australia, England, and the Netherlands. Welcome to Manhattan’s lower east side: a concrete jungle where dreams are made up of adoptable cats and feline-shaped munchies.  The Big Apple’s first cat cafe Meow Parlor has fostered 120 cats.  On any given day, Will, Sabrina, Freddy Knickerbocker, and nine other cats— who are available for adoption thanks to the cafe’s partnership with KittyKind—clamor over the tables, explore the crannies of bookshelves, and flop in front of the giant “MEOW” sign at the storefront. There’s a lot of hype surrounding this safe haven for cats and cat fanciers, so you’ll need to make a reservation in advance. Feel free to jump on Meow Parlor’s free Wifi, knock back a Counter Culture Coffee, and cuddle up with your favorite feline for up to five hours. Pack your catnip, ladies. After all, “you can’t have a good party without it,” says Dr. Ken Lambrecht, who runs the biggest cat weight loss program in the United States. Once a month, Lambrecht and his colleagues at West Town Veterinary Center bring seven to ten new cats together. Owners use lasers, wands, and string cheese to lure cats on exercise wheels, up stone and wooden climbing walls, into cat tunnels, and onto a banana yellow surfboard — the only source of cat turf wars at the gym. Free and open to the public, they donate $10 for every pound that a dog loses and $20 for every pound that a cat loses. “We’ve raised $3,000 for local rescues,” Lambrecht said. Two Victorian Siamese cat dolls are on display in what was once the Midland-Buckeye’s bank vault | Photo: Karen Lawrence

Located on the first floor of The Cat Fanciers’ Association Headquarters, the Feline Historical Museum is a mecca for cat lovers. Everywhere you look there are cats, cats, and more cats. Cat posters, paintings, and calendars cling to the walls. Rooms overflow with maneki-neko, the felines that continually wave Japanese talismans, and Siamese figurines. Seven hundred books about cats are clustered together in a small library, and a memorial book commemorates the cats that have passed on to that big kitty condo in the sky.