Aidan Cares: How One Kid is Changing the World Do you believe that a teenager can change the world? There is a boy in Atlanta who thinks he can do just that. His name is Aidan Thomas Hornaday and he is a 15-year-old philanthropist. At age four, he told his mother that he wanted to be a difference maker and that he did not wish to wait until his 18th birthday to do so. He was obsessed with the need to contribute; to be a provider of sorts, but wasn’t sure what that entailed. Then again, he was still a toddler at the time. A few years later, at age seven, Aidan’s vision grew into the joy of giving that it is today. It happened one-night while dining in a restaurant with his mother and some friends. Like most kids his age, Aidan got bored with the adult conversation and left the table to create his own diversion. He found a stool near the restrooms and pulled out a toy harmonica that was permanently stored in his front pocket. Without missing a beat, he threw his fedora on the chair next to him and disappeared into a musical oasis that caught everyone by surprise. When he awakened from his melodic trance, he was $80 richer and thoroughly confused as to why anyone in his or her right mind would pay him just for taking off a hat. Still, he was elated and couldn’t wait to get back to the table and share his exhilarating news. When his mother asked what he planned to do with the money, she was expecting a trip to Disney, but Aidan is an old soul with genuine purpose and his response was “to be the change that he desired”. He told his mom that he wanted to use the money to buy pills for children in Africa so they could fight off parasites and end their suffering. It was something that he remembered her telling him about once and he saw this as an opportunity to help. That decision turned into a movement that transformed into a non-profit organization dedicated to lifelong giving. His foundation, AidanCares, has since inspired youth from over 30 countries to create their own giving initiatives locally, nationally, and internationally. Aidan, with the help of his mother, has dedicated his life to making a difference for schools, non-profits, shelters, hospitals, and more. He is a global messenger for kindness who continues to share his mission through harmony and eloquent discourse. In other words, he is a difference maker.

In 2015, Aidan was invited to give a TED Talk to share his passion for music as well as his need to serve others. He began by playing live blues on the instrument that started his whole campaign in the first place: a small harmonica that he keeps in his front pocket. When he finished playing, he told the story of how running to need, not away from it, has set him on a journey to lead others toward philanthropy. It is one of the most articulate and powerful presentations I have ever seen, and he was only fourteen when he gave it. If a teenager with the ability to change the world seems absurd to you, it shouldn’t. These children are the future, and if they believe there is a chance to brush off the embers of indifference in our world and spin them into gold, then maybe we should listen. 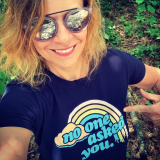