Every day of every year, New Zealand is the first country in the world to see the sun rise. And although there are countless mountain peaks, green valleys, sheep-lined hills and cascading waterfalls to view morning’s glory, one of my favorite local places is a black volcanic sand beach named “Piha,” located just up the road from Auckland. A quick hike up Lion Rock and the curvature of the Earth comes into view while surfers take off on multiple peaks, jetting left and right. Windsurfers ride the beach, seals peek at the sun and yellow-headed gannets scan the ocean for a sushi breakfast to bring back to their nesting chicks atop the volcanic cliffs. If raw fish doesn’t sound great for a morning snack, you’ll find a typical breakfast just down the road (or path) at The Piha Diner where you’ll find what they describe as “Hand Made, Free Range, Organic, Yumminess.”

A 45-minute drive down a twisty mountain road, one soon spots Auckland in the distance, its Sky Tower marking the top of the city that often from a distance looks like The Emerald City from the Wizard of Oz. Inside the city, there are plenty of gems and many of them can be found at the Auckland War Memorial Museum. Inside, you’ll find a treasure trove of medieval next to Samurai warriors and chain-mailed horses. You’ll also find hand-carved Maori pottery and canoes telling the history of the people who first settled this amazing land where sheep still outnumber people.

One of New Zealand’s most famous explorers is Sir Edmund Hillary and the pick axe he used to first conquer Everest can also be found in the museum, modestly hanging at the base of a twisting stairwell.

Outside the museum, you’ll find a great view of the 52 volcanoes that comprise the majority of the water-surrounded city. And possibly a view of one newly famous taco truck, The Lucky Taco. 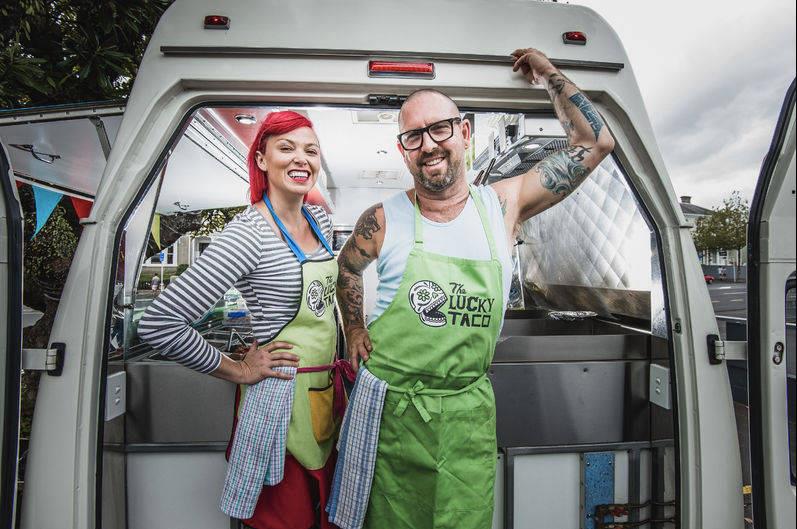 Otis Frizzell (a famous local graffiti artist) and his wife, Sarah, have brought Mexican food like no other to the country, after spending a long vacation in Mexico. Lucky Taco has literally brought Mexican cuisine to New Zealanders with fresh fish, carne, pork, shrimp and veggie tacos. Their little truck began as a passion project and has since blossomed into a line of taco kits and hot sauce carried throughout the nation in grocery stores. If you’re in town, find their location on Facebook and enjoy some freshly squeezed lime juice over tortillas just down the road. After lunch activities could include paddle boarding, running along the waterfront or a ferry ride over to the bohemian island of Waiheke. This relatively small island offers panoramic views of the city as well as thousands of grapevines emerging from its volcanic soil. Family-owned vineyards dot the rolling hills, including Mudbrick, where you can sip on the famously good Sauvignon Blancs and snack on fresh olives covered with bits of orange rind and herbs, or cheese that’s made right on site. If you’ve still got the room, lunch is also available courtesy of the vineyard’s award-winning team of chefs. Just don’t forget your credit card. The white sand beaches there are nothing to turn a blind eye to, either, and you can access all of them by cheaply renting a bike or local dirt road-faring taxi. Before the sun completely sets, the last ferry arrives in Waiheke, welcoming local Auckland commuters back to their island home, and giving tourists the chance to head back into the city. Atop one of the volcanic hills back in the city sits K (Karangahape) Road, a slightly shabbier area of town filled with vintage clothing stores, smoke shops and Asian food halls where some of the best food in the country is served hotter than your mouth can handle. New Zealand’s proximity to Asia makes it a great place to find Thai, Vietnamese and Chinese food. The cafeteria-like food halls don’t have the ambiance of a Four Seasons, but they usually do have TVs playing rugby. If the All Blacks are playing, they take on a sort of Asian fusion beer hall vibe. New Zealand is quite isolated from the rest of the world, so the people who call it home tend to treat each other as family, no matter where they’re from.

After the rugby and cricket are done for the day, much of Auckland turns in early. It’s not known as being an all-nighter type of place, but if you do find yourself sleepless, you can usually sing yourself some lullabies or an awesome 80s Warrant tune with your suitemate at one of the private karaoke bars.

The joints are authentically Japanese, offering customers couch-lined private rooms where you can belt out your best or worst till at least 4 am.

By that time, the sun will be about to rise for the first country on earth to see once again, warranting a trip back to the black sand beach for a bit of a surf in Piha.