I Heart Cleveland in One Day On the southern shores of Lake Erie, you’ll find an effervescent collective of optimists working tirelessly to turn muse into money. Cleveland, Ohio has been dubbed an underdog for so long. Entire generations have referred to it as the “mistake on the lake,” a pejorative phrase used after a long string of blows to the city — but, as Clevelanders say, you’ve got to be tough, and that resilience has already paid off. 2016 is fixing to put Cleveland back on the map as one of America’s original hubs for culture, competition and creativity. 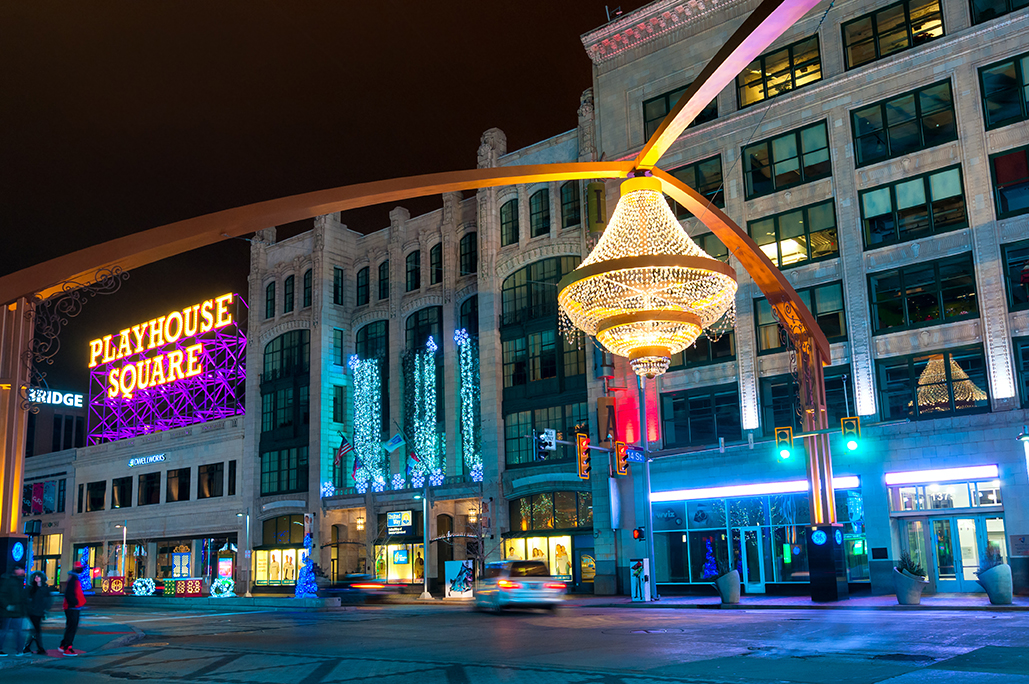 One of Cleveland’s splashiest new landmarks is the giant chandelier suspended above Euclid Avenue in the center of the theater district, Playhouse Square. Kenneth Sponsler / Shutterstock.com

After a historical win by the Cleveland Cavaliers at the 2016 NBA Championships, the city extravasated with pride, celebrating the end to a decades-long dry spell and the beginning of “Believeland.” The festivities were cut short, though, as the city prepares to host the 2016 Republican National Convention in July. Thousands of politicians, delegates and protesters will flood Cleveland in appreciation of all it has to offer. If you’re planning to visit Cleveland for the RNC, or just to explore, here are some necessary hometown staples.

Rock and Roll Hall of Fame

Established in 1983, this multi-story museum and store illustrates Cleveland’s significant role in laying the foundation for America’s music industry. Each level features original artifacts from different decades of music, including costumes worn by musicians such as Michael Jackson, Elvis Presley and Aretha Franklin. Other exhibits include John Lennon’s sketches and songbook, a complete video archive of inducted musicians and a look at audio technology over time. Rock and Roll Hall of Fame

As one of the country’s most comprehensive and hands-on science museums, Great Lakes Science Center features attractions for all ages. Learn how NASA prepares for launch, or how time morphs sound by recording your own demos. The center features Omnimax, a powerful motion-picture projection system with a domed screen, which sets it apart from classic IMAX theatres. After your visit, have lunch on the lake at the various picnic locations.

This four-block plaza acts as the city’s center, offering a number of opportunities for eating, shopping and sightseeing. It features some of Cleveland’s tallest buildings — Terminal Tower, Key Tower and 200 Public Square — and was added to the National Register of Historic Places in 1975 after it became the first street in the world to be lit with electric street lights and lamps. History buffs can visit the free monument to Civil War soldiers and sailors for a quick lesson. East 4th is where music, nightlife and community collide. Pedestrian-friendly and off-limits to traffic, each night is a perpetual bar crawl. Have a steak at Pickwick and Frolic, catch a show at House of Blues and grab a drink at Society Lounge for a successful and memorable night out. Whether you’re looking for fresh, locally made pasta to pick up for dinner, or a quick crepe for the road, Ohio City’s West Side Market has you covered. Featuring nearly a hundred local vendors, the market’s Neo-Classical architecture completely plucks you from 21st century city life. Food Network Magazine once named it America’s “Best Food Lovers’ Market” thanks to its eclectic variety of meats, cheeses, fruits and desserts. Get your food to go and take a walk to see all Ohio City has to offer. Founded and operated by two Cleveland natives, Mitchell’s Ice Cream is a must-try. Sample their dozens of flavors made with farm-fresh ingredients in Ohio and you’ll know why. With locations in Cleveland and surrounding suburbs, it’s effortless to get a scoop of pralines & cream or wildberry crumble after a day at the lake.

Play a game of volleyball, take a walk in the breeze or just relax on the warm sand of the recently renovated Edgewater Park and Beach. West of the city on Lake Erie, the beach offers visitors opportunities for swimming, fishing and grilling. As temperatures start to rise this summer, make the clean, crisp Erie water your oasis. Crust has only two locations, affording them the opportunity to craft each order to perfection. Their hand-tossed, slow-cooked dough and freshly cut ingredients are baked and served as one colossal slice so savory it’ll curb even the hungriest city-dweller’s appetite. You haven’t had Pad Thai until you’ve paired it with Johnny’s cucumber margarita and fried plantains. With an impressive array of Mexican and Thai options, even the pickiest of pallets are sure to find something appetizing. The only thing as remarkable as menu is the atmosphere. The moody, personal ambient lighting, hand-made murals and friendly, down-to-earth staff make it an unforgettable experience to share with friends. Head over to its corner location in Tremont for brunch and try their revitalizing, fresh-squeezed juices. While driving through CVNP, it’s easy to forget you’re in Ohio. It’s endless rolling hills of lush forest more often resemble something you’d see overlooking Asheville. Take a hike through The Ledges, near Peninsula, Ohio, and you’ll be rewarded with massive, viridescent rock formations formed by millennia of erosion and a view overlooking the most expansive region of the park. Hike the Brandywine Gorge Trail to explore the Brandywine Falls creek and waterfall.