The World’s Most Beautiful Libraries When was the last time you stepped into a library and enjoyed a view other than simple rows of books and desks perfect for hours of research? Since the 17th and 18th centuries, libraries have been built to hold the most treasured volumes and historical texts, and were historically designed to welcome aristocrats and scholars. Due to their high place on the societal ladder, many were built fit for kings, and around the world a few of these architectural masterpieces can still be enjoyed today.

A picture is worth a thousand words, but the world’s most beautiful libraries may leave you speechless. This is only a small sample from a much larger pool. Most are centuries old, one on this list is very new, and all are breathtaking.

Who has always wanted to visit the library from Beauty and The Beast? The largest monastery library in the world so closely resembles Disney’s portrayal that it has earned a reputation as the “real-life” version.

Built in the 1770s, the Abbey’s library hall was designed in dedication to wisdom and reason. If you ever have the opportunity to visit, take a break from perusing the 70,000 books stored along the three bright chambers (and the sculptures along the way) to look up: Seven cupola frescoes (watercolor artwork on the ceilings) are completely dedicated to the Enlightenment Era and depict the course of human knowledge from the beginning of time to Divine Revelation.

2. The Library of Congress in Washington, D.C.

The library with the second largest collection in the world (over 158 million items in over 460 languages) is located in none other than our very own Washington, D.C. The global resource as we know it today was influenced by Thomas Jefferson, who believed in the importance of all resources (regardless of origin or language). Located in the aptly named Thomas Jefferson building, the interior design elaborately reflects the American Renaissance period. 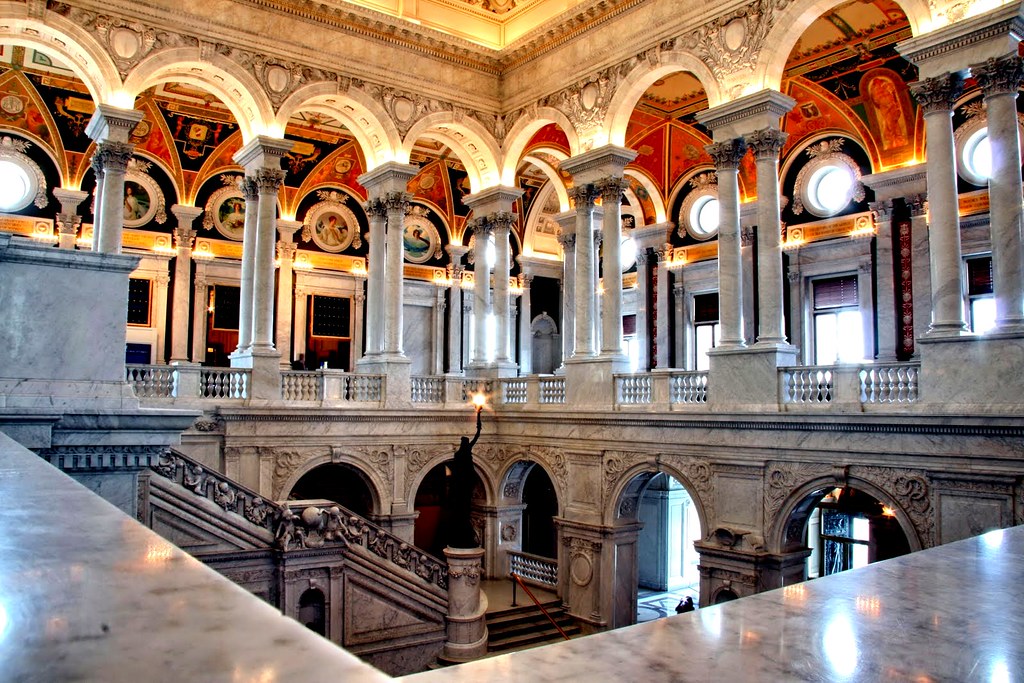 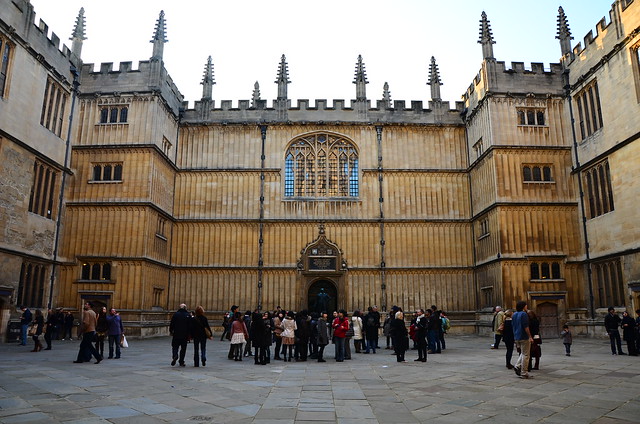 This academic library is so beautiful that Hollywood seems to snatch each opportunity to film there. You may recognize various locations in three of the Harry Potter movies, as well as the beginning of The Golden Compass, in addition to other films. Serving as the main knowledge base at the University of Oxford, this English Gothic treasure is the second largest library in England. 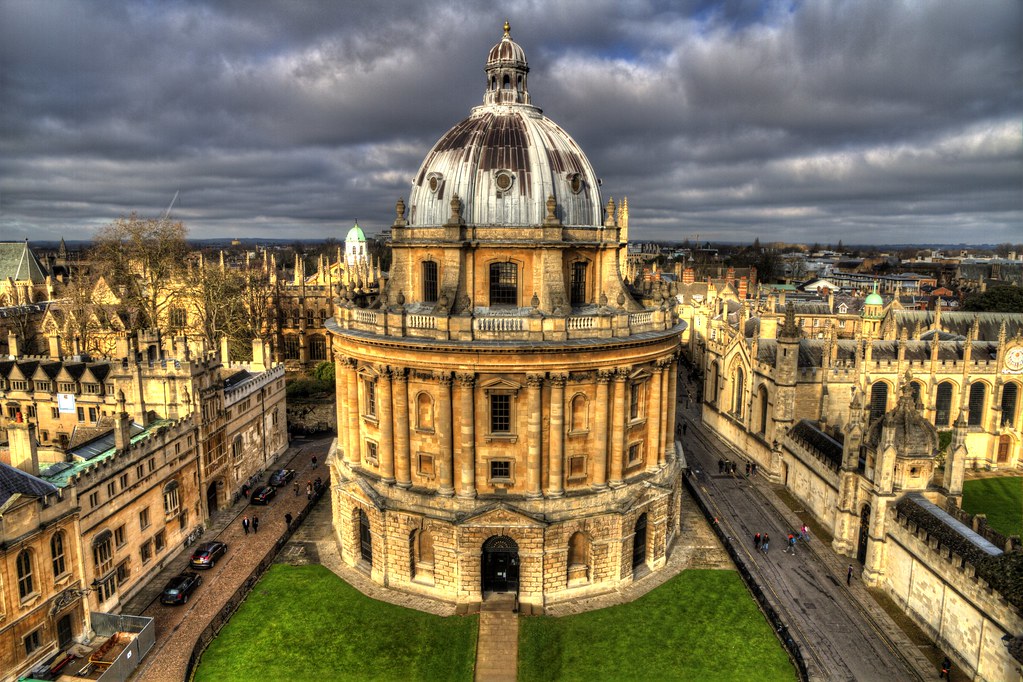 The dramatic architecture and 19th century neo-Manueline styles of this reading room is a feast for the eyes that may make your jaw drop. Light filtering through a stained-glass ceiling and a wrought-iron chandelier illuminate the panoramic floor-to-ceiling of books, artwork, and sculptures (that reflect the Portuguese Age of Discoveries). Started by Portuguese immigrants in Brazil, it was given the title of Royal Portuguese Reading Room by Portugal’s King Manuel II in 1906.

This location is the youngest library on this list (having opened in 2002) but stands as a living memory of the first library in Alexandria, which was one of the most notable in ancient history where scientists and thinkers once met. The new contemporary-styled building is a slanted disc on the coast of the Mediterranean Sea. Outside, the curved wall is inscribed with calligraphy, and above, the roof is speckled in skylights so natural light can filter through. 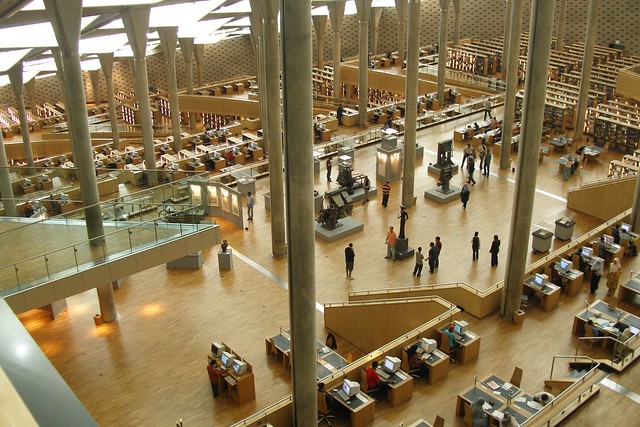 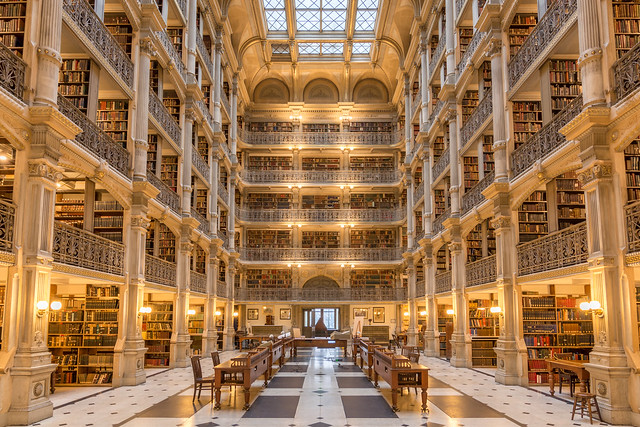 Would you love to get married inside a library? If the answer is yes, check out this American 19th-century library in Baltimore, which is so beautiful that it is regularly scheduled as an event venue in addition to acting as a traditional research facility. Here you will find six levels in cast-iron and gold-leaf, reaching a height of 61 feet from the marble floor. 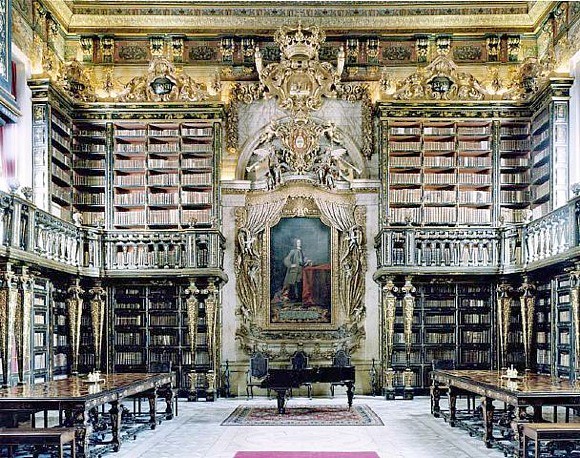 From the pictures, you may expect this to be the private reading room of a noble family instead of a resource for a university. The three grand reading rooms (each dedicated to specific subjects) are lined with beautifully ornate wooden bookshelves and separated by narrow hallways containing the institution’s coat of arms. Undoubtedly one of the most beautiful libraries in the world, the Baroque architecture adds an element of mystery. Or perhaps that feeling is due to the academic prison below the main level, where historically the university rule-breakers were confined. 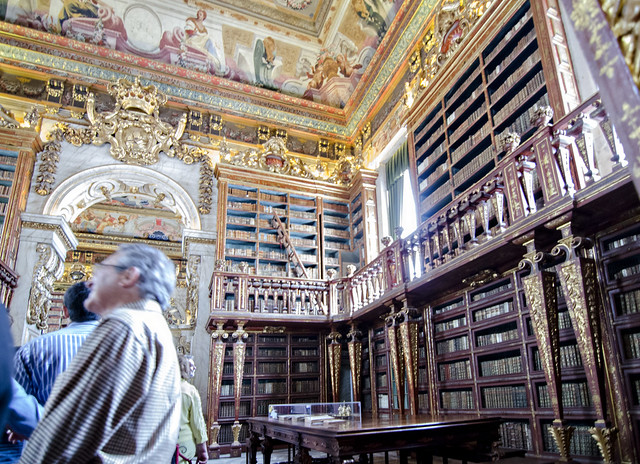