The romantic Indian Ocean tropics have long been an attractive destination for both leisure and recreation enthusiasts the world over. The historic Zanzibar islands, just off the coast of Tanzania, feature an archipelago consisting of more than 50 islands, most of which have a colorful history and a cultural diversity. The major island, Zanzibar, or Unguja, is a large, fertile landmass featuring spice farms, pearly sand, lush coconut palms, and radiant reefs. The island is home to a myriad of endangered and rare species, including the Red Colobus, Sykes’ monkey, and Zanzibar Suni. This autumn, explore the ephemeral sights and sounds of Zanzibar’s big island. 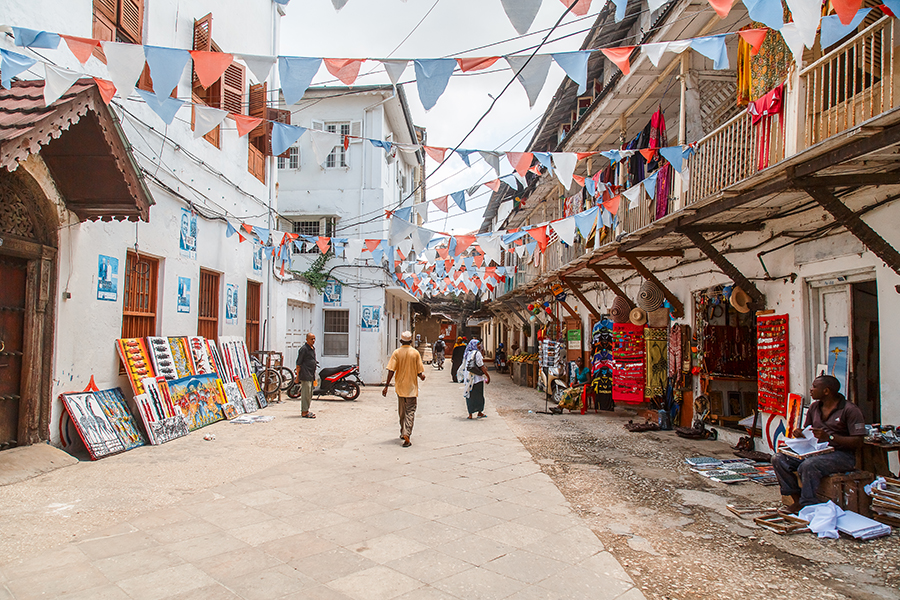 Local food and drink is easy to come by in Stone Town, establishments such as Zanzibar Coffee House, with coffee that comes directly from the owner’s plantation in southern Tanzania, or Emerson Spice, offering fresh seafood and vegetarian options, have a strong sense of place and ingenuity. Local delicacies include lobster, kingfish, prawns, octopus, and coconut dishes. Multiple museums in town, including an emotional memorial to victims of the slave trade, encourage reflection and understanding. Small fishing villages and tranquil waters are just a taste of what the eastside of Zanzibar’s largest island has to offer. The coast permits fishing, paddling, snorkeling, and sunbathing along its dusty, white sand beaches and barrier reefs. Its most popular beach is on Mnemba Island, about three miles off Zanzibar’s east coast. While waters are rough here, tour guides will take you out paddling and swimming for the best views of the reefs. While you’re there, Shooting Star Lodge is a perfect place to sleep for younger visitors. Built by a well-known Tanzanian-English couple and perched atop a coral cliff, the small inn features a bungalow-style bar and communal social scene. A general rule in Zanzibar is the further north you go, the less crowded and more serene your experience will be. Being less affected by the tidal range, the north coast beaches are ideal for water sports. Recently, north Zanzibar’s tourism has grown exponentially, but its beaches and nightlife is still quaint compared to its east side and Stone Town. Featuring breezy villas and a heartwarming turtle sanctuary, you’re sure to feel relaxed following a few days in the north. Wildlife enthusiasts will want to visit the Fumba Peninsula on the islands southwest corner. To see dolphins in the southern fishing town of Kizimkazi or the Red Colobus monkeys in Jozani Forest and wildlife reserve, treat yourself to eco and culture tours local guides offer. A few miles offshore on Chumbe Island, you can explore the most elaborate coral gardens in the world. Zanzibar is a culturally, economically, and ecologically sensitive island. Being a muslim-dominated autonomous nation, be sure to respect local customs. Dress modestly, don’t flaunt wealth, and ask permission before entering holy places such a mosques and memorials. When exploring the island’s national park, forests, or reefs, leave no trace as you would in your native country’s public lands.